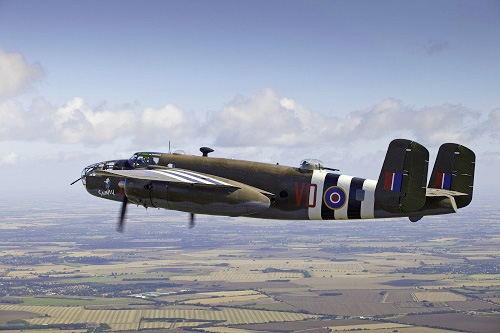 Built in North American Aviation’s Kansas City plant, B-25D-30 Mitchell 433318/N88972 was delivered on October 27, 1943 to the USAAF’s advanced flying school at the 402nd Army Air Force Base Unit at La Junta, Colorado. After flying 1,551 hours with the USAAF, the bomber was overhauled at the Kelly Field Depot, Texas. One of 70 B-25Ds included in a 1944 lend-lease transaction, Grumpy served in the RAF and the RCAF.

Post-war, Grumpy flew as part of the Northwest Air Command responsible for the defense of Western Canada. Early in 1962, it was struck off charge and sold by the Crown Assets Disposal Corporation. After several private owners and 17 years as a “fan's favorite" in European air shows, Grumpy was purchased by Historic Flight Foundation and restored to airworthy condition by Aircraft Restoration Company in Duxford, England.

The list of credits for the B-25 Mitchell bomber includes many “firsts”: It was the first army plane to see action on every fighting front of WW II, the first to sink a submarine, and the first medium bomber to fly from a carrier deck. Yet it was designed in just 40 days, without wind-tunnel tests or prototypes. The plane’s initial flight occurred in August, 1940. Designed to carry a 3,500 pound bomb load and a crew of five, it easily carries a heavier bomb load at a cruising speed of 200 mph, with red-line at 340 mph. Its wingspan is 67 feet, 6 inches, with fuselage length of 54 feet. It measures 15 feet, 9 inches from the runway to the top of its twin tails. The B-25 empty weighs 20,300 pounds, but when loaded to capacity weighs 35,500 pounds. Two Wright Cyclone engines—each delivering 1,700 hp—drive Hamilton hydromatic propellers. Grumpy is fitted with a special bomb bay ferry fuel tank allowing the aircraft to remain airborne for over 11 hours. 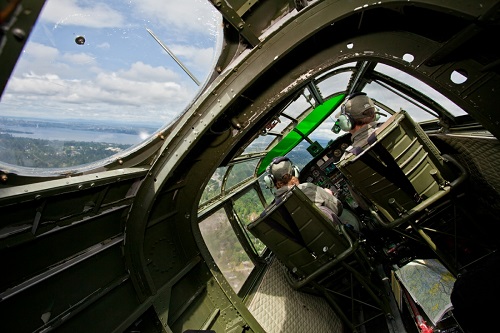