Designed to meet and beat the infamous Japanese Zero and defend Navy fleets against incoming kamikaze attacks, the Grumman Bearcat was among the last piston-engine flyers built specifically for World War II combat. As the saying goes, you didn’t strap into the Bearcat; you strapped it onto you—this little plane was all attitude and performance. No radar, no missiles: The Bearcat was a scrappy, feral fighter that could move from brake release at sea level to 10,000 feet in just 96 seconds.

For better or worse, World War II hostilities ended just as the first fleet of Bearcats was en route to combat deployment, though many of the 1,200+ planes produced did see military service over the next decades. The Bearcat was also the first official plane used by the US Navy’s Blue Angels demonstration team. Our Wampus Cat, one of 10 Bearcats still flying today, had a long, winning career in civilian air racing and demonstrations. 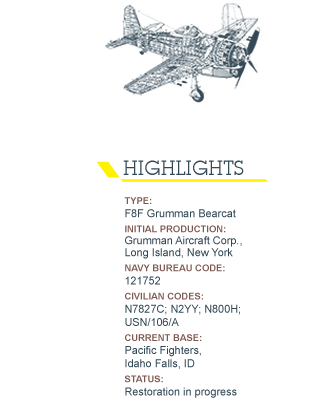