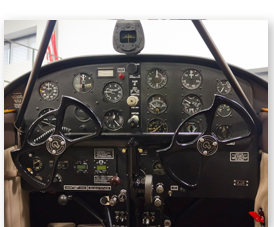 Walter Hershel Beech. Brilliant sales engineer for Curtiss Wright, accomplished charter pilot—at age 50, an underused innovator and weary veteran of too many business trips. In 1931, he unveiled his vision for a bi-plane that gave travelling executives an experience of speed, comfort, and flat-out luxury. Curtiss Wright said “great idea”, but given the economy, this is a fool-child, not a brain-child. Beech left the company, engaged with engineer Ted Wells, and partnered with his wife Olive Ann to set up the Beech Aircraft Corporation. Beech was known for getting the last word; after a slow start, the company thrived, producing more than 750 Staggerwings and 7,400 other notable aircraft.

First flight for the Model 17: 1932. Price: $14,000-$17,000. Sticker shock during the Great Depression, but sales did come in. And Beech was tireless about improving the plane. The D17S combined brains and beauty—for example, the staggered wings gave the pilot maximum visibility, helped make the plane virtually stall-proof, and delivered the “Look.” The rich interior, the bold tri-color schemes, the consummate, hand-tailored craftsmanship reflected in every plane–irresistible to those with wallet share. Without going into the details of model variants and technical specifications, just know that performance was remarkable. Equipped with a 450 HP Pratt & Whitney radial engine, retractable landing gear, and a lightweight, streamlined construction, the Staggerwing could climb 1600 feet per minute and reach speeds of 212 mph. Though that might seem slight compared to fighters like our Impatient Virgin the plane worked like a dream with the wind, agile enough to achieve a host of speed records and racing wins during the 1930s.

Talking to the initiated—namely, pilots–is brow-creasing. They’ll tell you that after flying a Staggerwing for 30 minutes, you’ll feel like the plane is simply a part of you. Then go stern and say YOU’D BETTER KNOW WHAT YOU’RE DOING WHEN YOU LAND. They get wistful talking about early Staggerwing models—the Johnson Bar, a hand system that made braking a veer-to-the-right, veer-to-the-left, go-center art form. And the tight distance between the plane’s body and the tail, which could send all but the most adroit pilots circling in endless ground loops. The D17S made things easier, but it’s clear that if it’s not attached to your body already, “a part of you” is built on learning from mistakes—and relishing the opportunity. As one veteran flyer notes: “There are two kinds of pilots—those who have experienced ground loops, and those who are going to experience ground loops. It’s embarrassing, but it makes you humble.” Staggerwing stories aren’t packed with the drama attached to many Warbirds, but they tell us that great pilots are grounded in humility.