This is the story of an aircraft that morphed into its own trainer and set the path for North American turbojet design. First produced in 1943, the F-80 (first known as the P-80) delivered a jet that offered the speed and agility needed to overtake the German Messerschmitt ME262. But as you’ll learn below, even the most advanced airplane pilots needed a jet trainer. The F-80 was transformed into the T-33 Shooting Star, one of the most durable, versatile trainers ever to hit the landing strip. Our Silverstar is simply the Canadian version of the T-33. Regardless their origin, over 7,000 T-33s have served more than 30 countries for training, research and development, advanced aerobatic demonstrations, and even combat. Canada retired the last of its Silverstars as late as 2005. And to date, the sleek aesthetics of the T-33 make it Boeing’s favorite photo opp.

Read more about the Silverstar 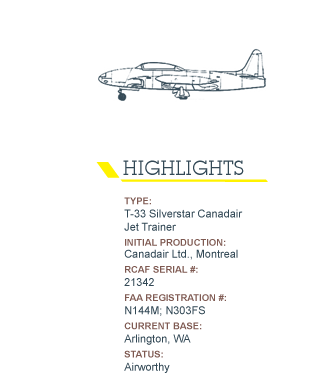