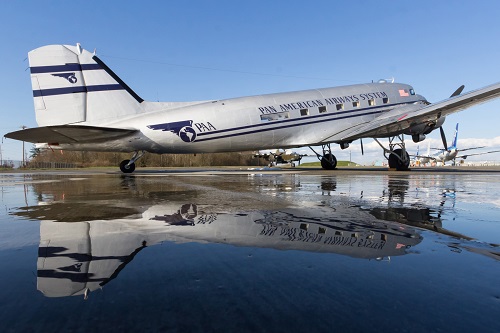 Our DC-3 began life in the Douglas Aircraft Co. Long Beach plant as one of 300 C-47s built specifically for the China-Burma-India theater of operations. Unique features include long-range fuel tanks and supercharged engines for performance at altitude. Delivered to China National Aviation Corporation (CNAC) in Calcutta, it supplied U.S. armed forces and Nationalist Chinese from 1944 to 1945.

Pan American Airways partnered with the Nationalist Chinese government to operate CNAC. Many CNAC pilots had flown with the disbanded Flying Tigers. These pilots sought cloudy weather or flew at night to avoid Japanese fighter planes. From April 1942, when the Burma Road was lost, to August 1945, CNAC crews made more than 38,000 trips over the Hump, transporting approximately 114,500 tons of people and supplies. Post-war, CNAC continued its operations as the leading airline in mainland China. In 1949, Civil Air Transport (CAT) acquired CNAC. Claire Chennault formed CAT with the support of the State Department to keep CNAC aircraft out of Communist hands.

The Communist and Nationalist Chinese disputed ownership of 71 former CNAC aircraft through British courts in Hong Kong. During this aircraft's three-year wait at Kai Tak Airport for the dispute to be resolved, it suffered damage when a booby-trap, apparently the work of a Nationalist agent, exploded creating a hole in the starboard wing.

The court case ended favorably for CAT, and N877MG was shipped to Grand Central Aircraft Company in California for conversion to a Super DC-3. Its new life as a VIP aircraft spanned five decades and many owners including International Shoe Machine Co. and Johnson & Johnson.

HFF acquired N877MG in 2006. Shortly thereafter, restoration began with the intention to recreate a Pan American DC-3 airliner from 1949 while preserving the interior luxury enjoyed by corporate executives of the time. 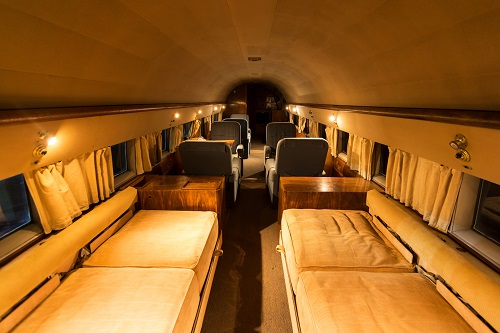