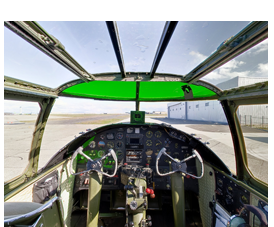 The United States was reeling from Pearl Harbor, and we weren’t ready to enter World War. Fast planning, ingenuity, and sheer willpower set us on track. The B-25 was pivotal—early versions such as the NC-40 had been flying since 1938, so the Air Force took a calculated risk, offering North American Aviation a “paper contract” that meant the government would accept the plane without rigorous prototype testing. Time was pressing. Working on the fly, a handful of brilliant designers and engineers gave us World War II’s most widely used mid-range bomber, as well as a low flying “strafer” and a superb trainer. Close to 10,000 B-25s were produced, among them more than 2,000 model Ds. The plane is also the only aircraft named after another visionary, William Mitchell, who got into considerable trouble for telling the truth too loudly and too soon– that victory depended on aircraft power.

With a wing-span of 67 feet and a loaded weight of 35,000 lbs, the B-25 was not designed for carrier duty. But it could take off from short distances at slow speeds, so on April 18, 1942, Jimmy Doolittle and his band of brothers launched 16 B-25Bs from the US Hornet, aiming to give Japan a serious scare. The Hornet was spotted too soon for safe launch, but the carrier was too valuable to lose. The pilots took off knowing they likely wouldn’t make it to protected territory. They bailed after bombing; most crew did survive. The raid jump-started US morale and shocked Japan—the bombers seemed to appear out of nowhere. Japan now knew it wasn’t impenetrable, withdrew a carrier front to defend the homeland, and may have begun planning the disastrous Battle of Midway as a result. Our B-25D is almost identical to the Model B, so when you see it, salute the Doolittle squad.

Aviators will tell you the B-25 is a delight to fly, even though it’s got no insulation, no pressurized cabin, and no mufflers (many pilots ended up with permanent hearing loss). But as one veteran notes, “The Air Force trains you to be tigers. You strap in and get the job done.” Both military and civilian pilots say that after a “grumpy” taxi, the B-25 is easy to maneuver and forgives a rough touch. During wartime duty, it could withstand real damage—“blow a jug” flak, engine fires, belly landings. The plane could continue flying if one of the engines failed. Here we can thank not only designers and engineers, but also the Rosies and other workers who took such care building the aircraft. For more details about the capabilities and “tech specs” for our B-25D, click here

Along with serving as bombers and later, as low-flying strafers, B-25s were great trainers. Grumpy’s flight path began in 1943, training US Army Air Force pilots. In 1944, she was transferred to the Royal Air Force as part of the Lend\Lease program and worked for the Royal Canadian Air Force. Though her work was quiet, she trained crews to fly B-24 Liberators for the critical aerial offensive in Southeast Asia. Post-war, it’s probable that she spent time in storage, but also joined auxiliary bombing units responsible for defending western Canada.

Grumpy wandered a bit as a surplus plane between 1962-1967, but did go active again as a civilian fire bomber in 1967. Grumpy could quickly maneuver in and out of deep hot zones and hold up to 1,000 gallons of fire retardant in what used to be her bomb bay, making her one of many B-25s who came out of storage to serve again.

Merrill Wien, one of our unsung heroes, purchased the plane in 1980. He spent years working patiently with Grumpy, who at this point was truly in a bad mood, after decades of hard service and too much time spent in storage. Eventually, he got the plane to Aero Traders in Chino, CA, intent on full restoration. Jimmy Doolittle, now age 90, entered again. When Wien asked him to take a flight with Grumpy after restoration. Doolittle quietly refused, saying he’d stopped flying at age 60 and wasn’t about to press his luck. Well, we still cherish the connection.

In 1987, Wien sold the plane to the Duxford Fighter Collection, who worked with Aero Traders to complete the restoration and took it to England for a career as a Warbird classic. The plane now featured RAF markings and became a fan’s favorite for many flight exhibitions. Historic Flight acquired the plane in 2008—which leads us to Grumpy’s most recent mission—crossing the Atlantic to honor those pilots who gave their lives delivering planes to the European theater. She’s back, bearing a sword of honor for all who served. And we have a real-time diary of the mission—take the journey with us and discover a new cast of heroes by clicking here.