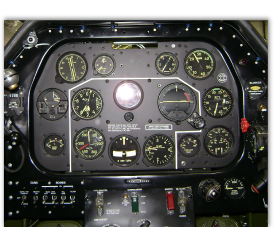 Like its fellow Mustangs, Impatient Virgin could reach astonishing speeds and altitudes—in one test, the P-51B hit 451 MPH at 25,000 feet—and also dive to fly through narrow passes that nearly skimmed the ground. But these capabilities can prove a plane’s triumph or its literal downfall, depending on the pilot’s judgment.

Though World War II would end within a year, 1944 was still marked by furious hostilities between the Allies and Germany, with Allies suffering heavy losses for B-24s and other bombers during long-range missions. The Allies needed lean, mean fighters that could escort them deep into enemy territory and protect them through battle. Our plane was delivered in early 1944 to the 376th Fighter Squadron based in Bottisham, England. After being assigned to the 361st Fighter Group, it received the official code E9-R and the (highly) unofficial name “Impatient Virgin.”

On September 27th, 1944, a multi-squadron bombing campaign known as the Kassel Mission resulted in terrible losses for the 445th Bomber Group—in large part due to B-24s straying away from their Mustang fighter escorts in the midst of heavy cloud cover. Undaunted, Impatient Virgin and the rest of the 361st Fighter Group went after the Germans, engaging in furious dogfights that downed 18 Focke-Wulf FW 190 fighters. It’s important to note that throughout the fight, pilots stayed in close communication, working in tandem when possible and warning each other of enemy approaches. Solitary, split-second decisions were based on a single-minded focus that put their instincts to strategic use. When they returned to the 376th base, only one Mustang had been lost. Though a dark day, the Kassel Mission reinforced the Mustang’s importance as both an escort and a fighter, and helped set the stage for victory.

Here’s the question: Did our plane crash and burn, or burn and crash? By mid-1945, the 361st Group, now based in Little Walden, was flying Mustangs for training purposes only. Active combat was unlikely after the bombing of Japan. During this period, Impatient Virgin was refurbished, assigned the new code E9-B, and nicknamed “Eva.” On June 22, Flight Officer Wade Ross took the plane on a low-level training flight—really low, and really fast. According to crash records, the plane was flying at 50 feet at 2400 rpm when Ross saw that the engine had overheated, popping the coolant hose. Ross took the plane up to 1,000 feet, but the cockpit quickly turned into a searing steam bath. Ross bailed, and the plane crashed into a farm field, witnessed only by a young farmhand.

Back to the crash and burn question. Ross sustained some serious burns himself. While his wounds were being dressed, he described the crash and noted that he might have flown too low and caught some hay in the coolant scoop—and that the plane was on fire by the time he reached 1,000 feet. If that were the case, the crash would have been due to pilot error, or in layman’s terms, a not-so-hot decision to fly low and fast.

Within a few days, Ross’s testimony had changed. Crash logs show Ross stating, “When I talked with Flight Officer Wood, I was excited,” which would explain why he initially said that he’d grazed a haystack and that the plane was on fire before it landed. His final testimony noted that he had neither seen nor felt the plane strike anything and that it was not on fire when he bailed. Investigation proved fruitless. The investigating board called the plane “a total mash-up” and noted they could find no witnesses to verify either of Ross’s statements. The cause for the crash was officially cited as “100% material failure,” and E9-B was quietly removed from inventory.

But there was a witness, at least to seeing the plane smash into a field. John Hales, the young farmhand who witnessed the actual crash, had never left Little Walden. In 2002, he made his way over to the excavation site for another aircraft, pointed to a nearby field, and said, “That’s the one you should be digging up.” Aviation archaeologists David Wade and Jeff Carless ran for the landowner’s permission to explore the field, and then started digging for parts alongside farmers who were digging for sugar beets. Within a few weeks, they’d discovered both a part number and the impact point for the crash.

Wade and Carless struggled through a year of bureaucracy before receiving an official license to excavate our Virgin, with a caveat designed to cause head-clutching. Because UK farming regulations required that sustainable fields not lie fallow, the archaeologists had to stop work and clear the field during the sugar beet season. Excavation took more than three years, with all involved flipping from patience into racing mode to finish before the license expired. Along with the data plate that leads the way to airworthy restoration, Wade and Carless found a host of parts: a dinghy that still inflated, an engine primer that still worked, the windscreen, instrument panels—and as a poignant finish, Ross’s pilot helmet, which he must have flung off just before he bailed. Ross died in the early ’60s, so we’ll never know beyond doubt the true story behind the crash. What we do have is another kind of witness: a Mustang packed with courage, victory, tragedy, doubt, and comradery.