Our B-25D Mitchell Bomber is packed with military and civilian heroes, lauded and unsung. William Mitchell, the plane’s namesake. Jimmy Doolittle, who gave us hope after Pearl Harbor. Countless pilots and crews who took on bombing missions that spanned all war theaters—in particular the South Pacific–and who also brought desperately needed planes to the European theater. Add the designers, engineers, and Rosie the Riveters who ensured the B-25 was the hardiest of planes, during a time when bombers were produced at a furious pace. And finally, all the civilian owners who’ve kept the plane alive and active, most recently on a mission honoring World War II veterans. 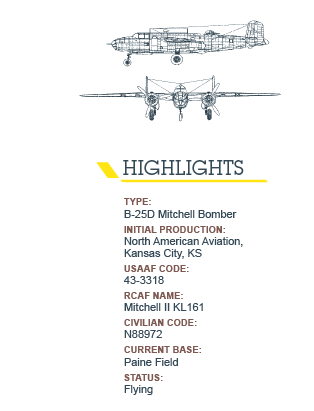