Nicknamed “their little friend” by Allied bomber crews in World War II, the P-51B Mustang emerged in 1942 as the fast, high-altitude North American fighter that could escort bombers deep into enemy territory and turn the tide of losses sustained during long-range missions. The P-51B also saw action in the Korean War and remains a favorite racer and aerobatics performer for today’s aviators. Between 1944–1945, our Impatient Virgin flew more than 700 hours for the 376th North American Fighter Squadron in England. That’s a more than exceptional record—in most cases, the P-51B flew only about 25 hours before sustaining irreparable damage. After a rather interesting crash, our plane lay scattered in a British beet field for more than a half-century, when it was rediscovered and “harvested” by extremely patient archaeologists. 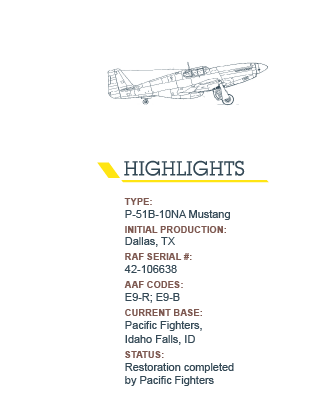