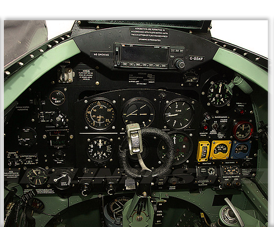 Our SL633, which refers to the original RAF registration number, featured the elliptical design and power-to-weight ratio that made the LF Mark IXe a pilot’s dream to fly, a lethal fighter, and a delight to watch. It could take off and land on an airstrip or a patch of cornfield. It flew in turn for dogfights, escort missions, aerial performances, front-line defense, and combat training.

Though World War II was drawing to a close, the work of war wasn’t ending. Britain wanted to help the Czech Fighter Wing—part of the renowned RAF Squadron 312—equip a newly formed home base in Plana. The Brits extended a loan that enabled the Czechs to purchase, refurbish, and fly 54 Spitfires to the new base. Among the last batch of Spitfires produced at Castle Bromwich Factory, SL633 arrived at the RAF base in Manston, England, where it was re-assigned to the Czechoslovakian Air Force with the code DU-K and flown to Plana.

Code changes for SL633 had aviation researchers at their wit’s end later in the story, but the change to DU-K is easy enough to explain—SL633 was the designated plane for Flight Lieutenant Karel Posta, whose expertise gave him the clout to fly a designated mount with a “personal stamp.” In 1946, DU-K received new national markings and another code, JT-10, reflecting the 4th Air Regiment and sequence number.

Karel Posta made good use of his mount during its tenure in Czechoslovakia, flying the plane in aerobatic performances that drew more than 100,000 spectators. The versatile JT-10 flew also for training programs—including cross-country, low-level flying, and army cooperation exercises—and went with Karel in 1947 when he took command of a new, highly selective Fighter Training Center in Plana. Until early 1948, the JT-10 worked for some of the most experienced instructors and talented pilots-in-training in the world.

A 1948 communist coup d’état ended the flow of supplies for Spitfires and dismantled the Czech Air Force. But our Spit’s work was far from done. While still an autonomous country, but likely knowing its days were numbered, Czechoslovakia had promised to supply Israel with military arms that would help the young country in its fight to exist.

At this point, the actual paper trail for registration number SL633 was lost in transit (but stay tuned). One of a group of LF Mark IXes traveling to Israel, the plane crossed the Czech border in parts packed in a box, where it lay for more than a year. After being completely overhauled and modified for fighter reconnaissance, the plane received the Israeli code 20-42. It flew for Israel until 1954.

Many aviators have experienced the endless screech that means the wheels didn’t come down, they’ll be OK, but the plane’s going to the shop for a long time. After its 1954 belly landing, our Spit went to Bedeck Aviation for more than 4,000 hours of repair and refurbishing, and was then transferred to the Burmese Air Force. The plane was recoded as UB-425 (and later exhibited as UB-424; between the RAF serial number SL633 that went AWOL and the UB coding confusions, certifying our Spit’s identity baffled researchers for 23 years).

We don’t know what service our LF Mark IXe performed in Burma; what we do know is that the plane is one of a handful of Spitfires exported to Burma that are still extant—and after more than two decades of sleuthing, certified for airworthy restoration.

Certifying a plane for airworthy restoration depends on whether its provenance, or identity history, can be authenticated beyond doubt. In most cases, restoration requires that a plane still carry the data plate marked with the original serial number. When our plane arrived for restoration at Historic Flying Limited in Duxford, all involved knew they had a genuine Spitfire in hand—but its data plate was gone, and the plane sported a Harvard T-6 tail and dizzying layers of changes to its body and code markings.

It turns out that the plane had been puzzling researchers since a 1983 sighting in Mandalay, where it was found perched on a pole at the Royal Palace, bearing the marking UB-425 and that odd tail. In 1995, aviation researcher Peter Arnold rediscovered the plane in Burma, this time marked with a crudely painted UB-424 code. To make a long and interesting story short, researchers established in 1999 that the plane was indeed UB-425, but that there had been two UB-425s; our LF Mark IXe had been recoded on the fly, with no paper trail.

The big problem remained—what was the original RAF serial number for the plane? In 2006, we knew we had a treasure for Kilo-7, but without the number, we couldn’t prove it. While Arnold, Shlomo Aloni, and Adenek Hurt had spent years of hands-on work to establish our plane’s life story, the RAF number was still AWOL.

The eureka moment came the way it usually does: like it’s been waiting for you all along—but unless you’ve expended a lot of sweat, you can’t see it. Peter Arnold had wrestled existing information into a high probability that the RAF serial was SL634. HLF commissioned researcher Shlomo Aloni to go through the Israeli archives one more time. What Aloni found: An engineer’s scrawl in the upper corner of the Aircraft Servicing Form for 20-42 (our plane’s Israeli identity). The note said: “Ex 633.” All the digits fell into place, so to speak, and we have our certified treasure.