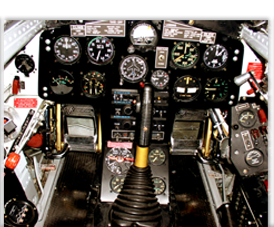 “Biggest engine, least airframe” was the Grumman Aircraft Corporation’s motto for the F8F Bearcat. The plane serves as an example of evolving innovation— the hallmark of great aircraft companies. All the Grumman “cats” were built in response to the need for fighters that could stalk their prey by night. With the F8F, Grumman delivered an aircraft that was lighter and more maneuverable than the Hellcat and managed Naval carrier takeoffs and landings that the twin-engine Tigercat couldn’t handle. The Bearcat flew circles around the North American P-51 Mustangs, the Supermarine Spitfire, and even early model jets. That’s one reason our Wampus Cat saw most of its work in serious play—literally flying circles around pylons in the famed Reno Air Races and other races and demonstrations.

While the F8F just missed active duty in World War II, it was a plane that didn’t die. The Bearcat served the US Navy and US Marine Corps for training and front-line duty. It flew in the Korean War and played bomber and escort roles for France, Thailand, and Vietnam. Thrill-junkie pilots jumped at the chance to fly the Bearcat: A single-seat plane that was all engine and torque, the Bearcat demanded precision takeoffs and landings to avoid catching the propeller on the ground.

We’ll call our plane a late bloomer, and bless that fact, since it’s likely why our Bearcat’s flight career spans more than 50 years. From its initial flight in 1948 through 1957, the plane spent its time housed in Navy hangars that spanned Texas, California, New York, Virginia, and Colorado. Navy logs show that the plane was tested and overhauled on a regular basis from 1948–1953 so that it would be ready for takeoff on short notice. In 1953, the plane went dormant in container storage and was removed from the Navy’s list of flyable aircraft in 1957. After a thorough overhaul in 1959, the plane became airworthy again for photo reconnaissance work.

If you’re new to the world of aviation, pilots can seem a baffling species. Why continue to risk life and limb if you’re not in combat or on the job? The answer is that pilots simply need to see the world from inside the sky—when the urge hits, “it’s time to yank and bank.” In 1964, Bill Stead, a World War II flying ace and champion racer, organized the first of many air racing events held in Reno, Nevada. The event was held on a scrap of desert airstrip, with planes racing “hot laps” around pylon poles and performing aerobatics—satisfying the thrill-junkie pilots, sparking innovation, and holding 200,000+ viewers captive. Our Bearcat won 4th place in the 1964 Gold Unlimited Race. Her pilot was Walt Ohlrich, another World War II pilot and champion racer.

Air-racing caught fire across the globe, with aircraft owners going to extreme lengths to modify their planes for optimal performance. For example, one legendary Bearcat, called “Rare Bear,” grew some Lear Jet wings and nose fuselage that resembled an outsized gas mask. Equipped with less drastic modifications, Walt Ohlrich captured awards with our Bearcat through 1972. The plane continued racing in the US until 1990, under a bewildering array of names: Tom Cat, Tom’s Cat, Miss Priss, Tonapah Queen, Sweet Pea, Precious Bear, and Bearcat Bill.

After a successful racing career, our plane went to England in 1990. Bearing the more conservative designation USN/106/A, it flew in demonstrations until 1997. Apart from minor engine and cockpit modifications, the plane looked much as it had in 1948, with navy-blue livery that provided protective camouflage for night fighting. Between 1995–1997, the plan was showcased in Stephen Grey’s Fighter Collection in Duxford, Europe’s largest collection of airworthy World War II planes.

Bill Anders brought the plane back to the US in 1997. Anders has been airborne for most of his life, both as an Air Force pilot and a NASA astronaut whose missions included Apollo 8 and Apollo 11. His first love? The little planes that changed the course of history, transformed aviation technology—and let pilots show their prowess. Wampus Cat fits the tune—the plane’s name was inspired by “Bear Cat Poppa Blues,” where one mean Tomcat is bent on winning the right Wampus Kitty. Currently, Wampus Cat is in the final stages of being restored to its original 1948 flying specifications and will soon arrive at Historic Flight.